March’s punchy employment figures could be as good as it gets for the labour market.

Interest in several higher-paid professional occupations has risen since the start of the pandemic. Indeed’s Relative Job Seeker Interest metric, which measures interest in an occupational sector relative to the average job posting, shows that legal, software development and mathematics jobs have seen the biggest rises in jobseeker interest. Scientific research and civil engineering roles have also increased in popularity. Meanwhile, a number of lower-paid occupations have seen declining interest levels. That’s a reflection of the rapid growth in job postings in these categories which has outstripped the supply of candidates available to fill the roles. Cleaning, construction, warehousing, manufacturing and hospitality roles are all seeing lower interest levels on average than they were prior to the pandemic.

Employers hiring for the categories where interest has risen are in a more favourable position in terms of candidate selection than elsewhere where the market is tighter. One factor likely to be making these occupations more attractive to jobseekers is their greater potential for remote work. Searches on Indeed containing terms related to remote work have continued to climb in recent months even as the economy has fully reopened. That underscores the persistent shift in worker preferences towards more flexible working models.

The tight labour market is generating faster wage growth, with regular pay growth picking up to 4.2% year-over-year (y/y) in March. But with consumer price inflation soaring, pay is being squeezed in real terms. Regular pay after accounting for inflation was down 1.2% y/y in March, the biggest drop since November 2013.

Advertised wages in Indeed job postings continue to rise, up 5.3% y/y in April. A handful of occupational categories are seeing wage growth keep pace with inflation, largely the ones facing the most acute hiring challenges like hospitality, driving, care and construction. Employers in these sectors are having to raise pay to deal with the combination of high vacancies and falling relative jobseeker interest.

But other categories, including a number of professional occupations where demand for staff hasn’t been running as hot as at the lower-paid end of the labour market, are seeing modest or even negative wage growth.

For the time being, the labour market is strong. The latest Office for National Statistics (ONS) data testified to a particularly robust first quarter. Notably, the single-month employment rate for people aged 16-64 jumped to 76.5% in March, above its 2019 average for the first time since the start of the pandemic. That’s despite GDP having contracted by -0.1% in the month.

The unemployment rate for January to March 2022 fell by 0.3 percentage points on the previous quarter to 3.7%. More timely vacancies data for the three months to April showed a new record at 1,295,000 (albeit the rate of growth slowed further).

For the first time since records began, there are fewer unemployed people than job vacancies. That marks a dramatic turnaround from last summer when there were more than four unemployed people per vacancy. It also highlights the extreme tightness of the labour market, which has been fuelling hiring difficulties across many sectors.

There were also record flows from inactivity to employment (648,000) over the quarter. That’s possible early evidence of the cost of living crisis prompting more people to rejoin the workforce, though at 21.4% the inactivity rate remains more than a percentage point above its pre-pandemic low. The UK’s large and lingering participation gap puts it at odds with other advanced economies and has been a key driver of persistent worker shortages. A big rise in long-term sickness is responsible for much of the increase, which is concerning in that many of those people who have left the workforce may be unlikely to return to work.

What next for the labour market?

Real-time data from Indeed job postings indicate that the labour market is holding up, for now. Postings remain high, but have plateaued in recent weeks. They were 45% above the 1 February 2020, pre-pandemic baseline, seasonally adjusted, as of 27 May 2022. That’s down slightly from a post-pandemic high of 50% in mid-February 2022. 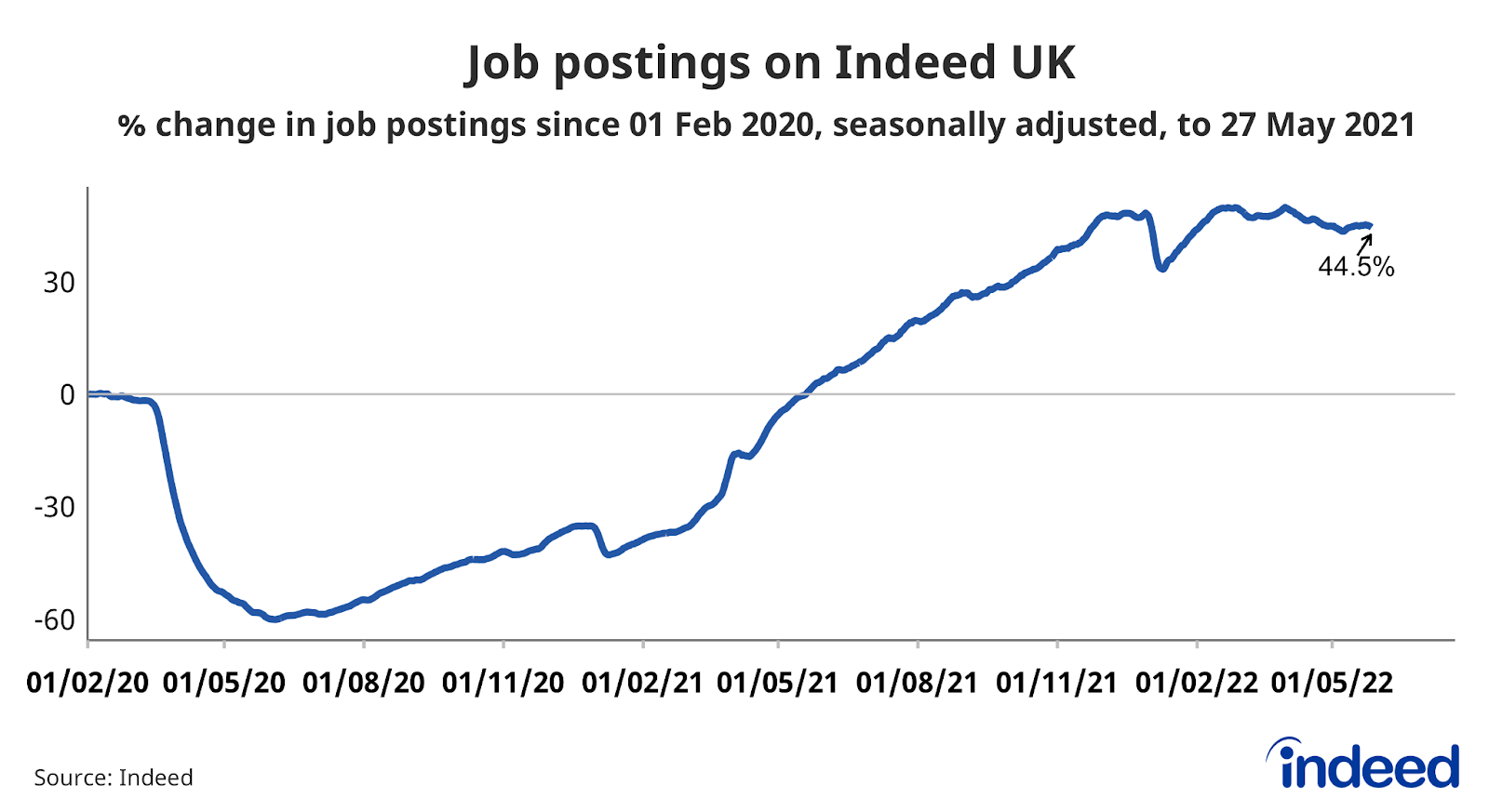 But key economic indicators are flashing red warning lights. The UK Purchasing Managers’ Index nosedived in May, undershooting expectations by a wide margin. A particular strength of this survey is capturing turning points in the business cycle — the latest print suggests the anticipated economic slowdown is already well underway. The UK consumer confidence index meanwhile has sunk to lows that have historically presaged recession four out of the past five times it has done so.

Many employers still have staffing gaps to fill and the labour market generally lags trends in the wider economy, but it’s unlikely to be too long before the weakening economic outlook filters through to employers’ hiring decisions.

In the near-term, the labour market remains extremely tight, but the economy is heading into choppy waters as the cost of living crisis worsens. Employers and jobseekers need to be alert to possible changing labour market conditions over the coming months.

We host the underlying job-postings chart data on Github as downloadable CSV files. Typically, it will be updated with the latest data one day after this blog post was published.

All figures in this blogpost are the percentage change in seasonally-adjusted job postings since 1 February, 2020, using a seven-day trailing average. 1 February, 2020, is our pre-pandemic baseline. We seasonally adjust each series based on historical patterns in 2017, 2018, and 2019. Each series, including the national trend, occupational sectors, and sub-national geographies, is seasonally adjusted separately. We adopted this methodology in January 2021.

The number of job postings on Indeed.com, whether related to paid or unpaid job solicitations, is not indicative of potential revenue or earnings of Indeed, which comprises a significant percentage of the HR Technology segment of its parent company, Recruit Holdings Co., Ltd. Job posting numbers are provided for information purposes only and should not be viewed as an indicator of performance of Indeed or Recruit. Please refer to the Recruit Holdings investor relations website and regulatory filings in Japan for more detailed information on revenue generation by Recruit’s HR Technology segment.

Finding the right candidate shouldn’t be a full-time job. Use Indeed’s simple and powerful tools to source, screen and hire faster.

The latest insights on hiring and the economy, delivered straight to your inbox