This post is updated as of 2nd October 2020. We will continue to update these trends regularly as we track how coronavirus impacts the global labour market.

The job postings on Indeed UK showed another slight improvement last week. The gap in trend versus last year was -46% as of 2nd October, narrowing from -47% the previous week. That was the eighth successive week of improvements.

Since the nadir of -61% seen on 4th June, we’ve seen a steady, albeit slow, recovery in the job postings trend. Sectoral variations over that period have been marked though.

Construction, cleaning, manufacturing and childcare on the rise

The strongest improvement in trend since 4th June has been in construction (+51.0ppts). The construction sector has enjoyed a bounce in activity since the easing of lockdown, helped by strong house building. Next has cleaning & sanitation (+43.7ppts), as stricter hygiene standards have helped boost demand for cleaners. Production & manufacturing (+40.0ppts) and childcare (+39.3ppts) have also seen strong improvements. Sectors with exposure to the distribution and ecommerce side of the economy, like loading & stocking (+37.3ppts) and driving (+36.1ppts), have fared relatively well.

At the other end of the scale, pharmacy and accounting have seen deteriorating trends. Sectors like personal care & home health and nursing performed relatively resiliently through the lockdown, but have subsequently seen only marginal improvements in trend.

New job postings in food prep and hospitality on the wane

Amid calls from some MPs to scrap the 10pm curfew on bars and restaurants, data on new job postings (those on Indeed for seven days or less) in food preparation & service and hospitality & tourism point to a downturn in hiring intentions since the new restrictions came into place. Having dropped as low as -95% down on last year during full lockdown, new postings in these sectors had been recovering gradually through the reopening period and as the government’s Eat Out to Help Out scheme provided support during August.

The weakest job postings trend continues to be seen in London, followed by the South East and Scotland. The North East is closest to last year’s trend, followed by Wales and the East Midlands. 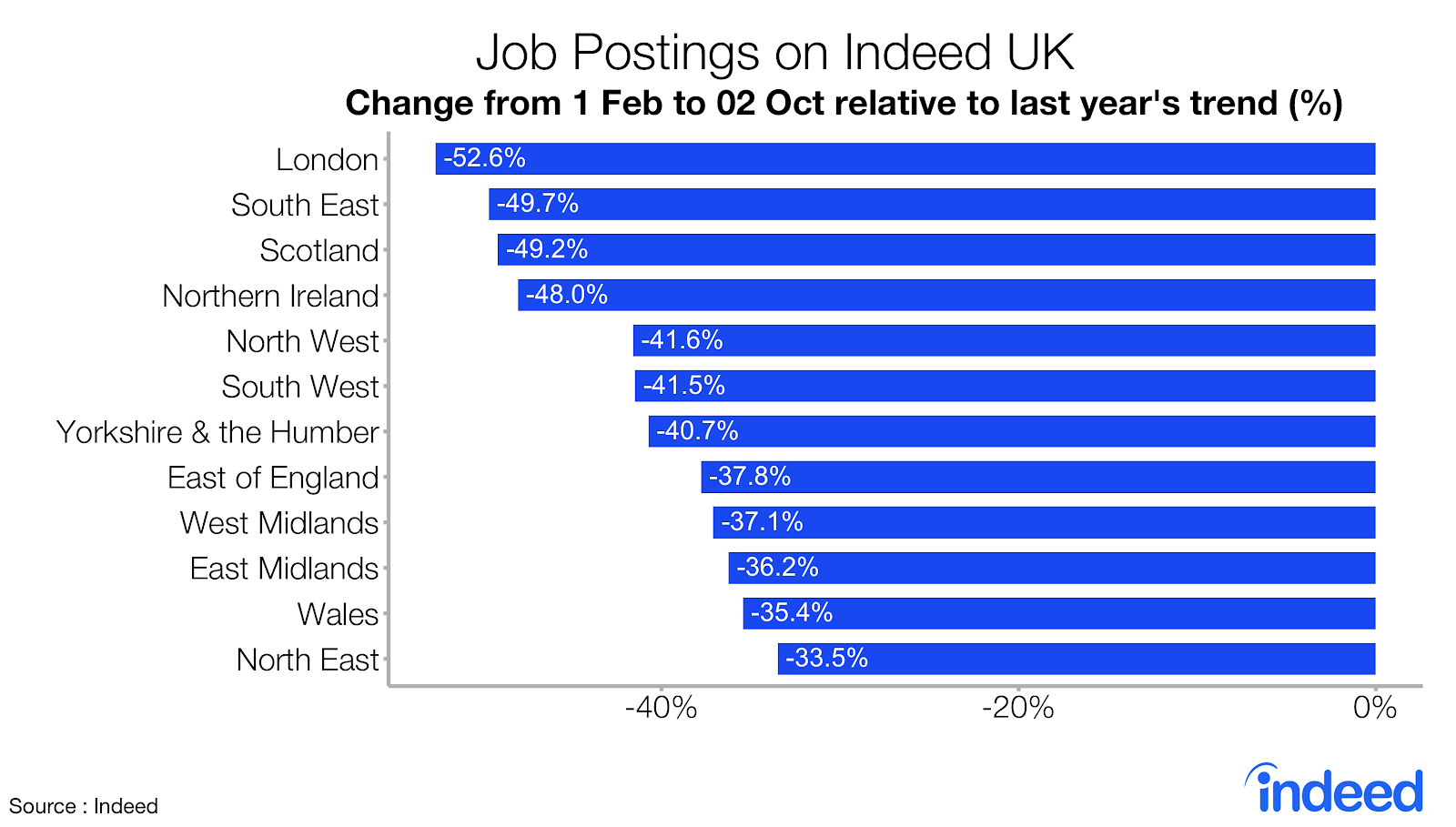 We will continue to provide regular updates on these trends as the situation evolves. We also host the data behind the postings trends plots on Github as downloadable CSV files. Typically, the site will be updated with the latest data one day after the respective Hiring Lab tracker is published.

Coronavirus and UK Job Postings: Hiring Holding Up in Face of Headwinds